Many people celebrated Christmas Day by unwrapping gifts, catching up with loved ones, and watching the big Disney Parks “Frozen” Christmas Celebration, which aired on ABC Thursday morning. For those who miraculously avoided the year's worth of singing “Let it Go” (against the song's own advice), “Frozen” is the most popular animated Disney Princess movie in recent memory, boasting fun musical tunes, and two leading ladies who aren't rescued by a man. The Disney Parks Celebration musical guests, and a man in a snowman costume dancing and singing about summer, while backed by dancing lines of scantily clad twelve-or-so-year-olds.

The girls were in the same style of garb as Dick Van Dyke in “Mary Poppins” during the “Supercalifragilisticexpialidocious” musical number. However, their outfits included short skirts that only covered their butts and private parts, leaving long bare legs exposed. Backs of the shirts reveal patches of bare skin.

Why? Maybe because the celebration took place in Florida, and the girls would be sweating unbareably if the outfits did not leave some skin exposed.

Even if that were so, these outfits frighten me. Not simply because they seem more appropriate on women at a burlesque club, but because they go against what “Frozen” is trying to do: symbolize a new era in Disney animation, that eschews the tropes of the early Disney Princesses as the simple “Damzel in Distress,” the beautiful woman meant to be rescued by the handsome prince.

This is not to say that all Disney princesses before “Frozen” were 100% bad role models. Cinderella did work her butt off, as noted by internet personality Doug Walker, also known as the Nostalgia Critic. She was actually Walt Disney's favorite, being that, according to Disney himself, “She believed in dreams, all right, but she also believed in doing something about them. When Prince Charming didn't come along, she went over to the palace and got him”

However, it was basically by looks alone that got the Prince to fall for her. And while Cinderella did have the other glass slipper to be fitted on her foot when the one she lost got shattered in the end, it was by marrying into royalty that she got out of her life as a servant to her stepsisters and stepmother.

I thought “Frozen” was supposed to teach young girls that they don't need a man to rescue them. It is supposed to be about two sisters saving each other, and not being saved by the male leads. What is the song “Let it Go” if not an anthem for just being yourself and saying, as Elsa sang, “I don't care what they're going to say.”

This is not the first time Disney has sent mixed messages. In May of 2013, a petition on change.org took off in protest of Disney's redesign of Pixar film “Brave”'s leading lady, Merida, for her induction as the 11th Disney Princess. Brenda Chapman, the film's writer and co-director (a.k.a. original director who was fired and replaced by a man, due to, as she put it, "creative differences"), said in a 2011 interview with Pixar Portal she had a very specific goal in mind when creating Merida. Chapman said

"Because of marketing, little girls gravitate toward princess products, so my goal was to offer up a different kind of princess — a stronger princess that both mothers and daughters could relate to, so mothers wouldn't be pulling their hair out when their little girls were trying to dress or act like this princess. Instead they'd be like, "Yeah, you go girl!"

While Disney stated that the redesign was meant for “a limited run” of products, including “backpacks and pajamas” (qtd. on ign.com), and the original version would still be used on its website (and still is), the redesign contradicts the original character's personality. According to the official character profile on Disney's website, “Merida is a Princess by birth and an adventurer by spirit. She spends her days practicing archery, riding her horse Angus, and exploring the world around her. She loves her family, but she wants to control her own destiny.”

As opposed to her more realistically proportioned body and rough-and-tumble appearance, she has a more “idealized” appearance. IGN's Daniel Krupa explains:

She was given a new gown – one much brighter and more elaborate than the simple dress she wears for the majority of the film. Functionality has given way to chic belts, sequins, and gold lace. Much more worrying, however, are the physical alterations. The waist has certainly been taken in an inch or two, and I suspect those cheeks are no longer rouged by the bracing Scottish wind.² 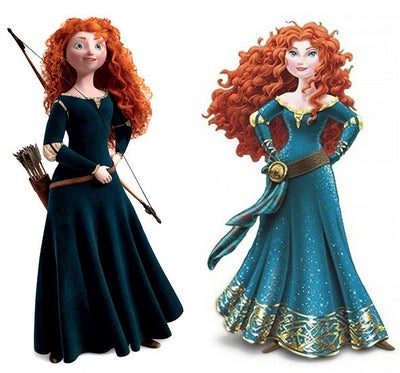 I sense a disturbance in the Force.

Throughout the movie, she completely jettisons her mother's attempts at primping her for her role as a princess of her kingdom, and even gets frustrated when she struggles to pull the arrow back on her bow when in a tight dress.

So, the problem isn't just a narrow definition of how women should dress, but more saying that they can be themselves, but as long as they look how Disney decides a princess should look.

This is the big problem with Disney as a culture today. It seems to be one step forward, two steps back. More recent Disney movies have presented princesses with more agency, even rescuing the male lead, like in 2007's “Enchanted.” Yet, on amazon.com, and at Holyoke's Barnes and Noble, one can find a Disney Princess book that is literally called “Pretty Princess.”

See, little girls? Be all that you can be.

So, what should little girls value more, Disney? What they look like? Or who they are inside?